It’s here! The American Idols LIVE! 2011 Tour is coming to a town near you this summer. See Season 10’s Top 11 perform at a town near you. Locations have been announced.

Use the code AMERICAN beginning at 10am your local time on Wednesday, May 11.
You have only until 10pm Thursday, May 12 to take advantage of the pre-sale code.* 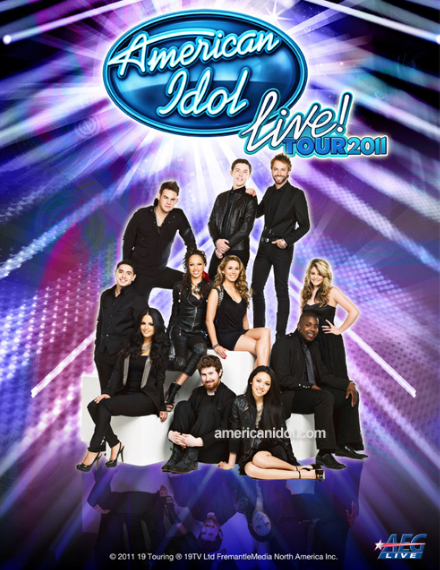 Here are the tour dates and locations for 2011:

UPDATE: Hmmm. After just a few hours at number 9, the idol album slipped into number 11 as of March 12th, 3pm!

American Idol Season 10 enjoys many firsts this season: new judges, new stage and bigger set, a keener audition process, social networking ‘privileges’ for the contestants, a more interactive website with online voting, a more active social network accounts that ‘talks’ to its followers, offering behind-the-scenes tidbits; and just two days ago, a studio version album release of all the songs performed by the finalists!

Checking on how the album is faring, the Top 13 should be feeling pretty, pretty good. The compilation just made it into the Top 10 iTunes charts at No.9 competing with the big names in music!

It has surpassed upcoming albums from Britney Spears, Chris Brown and Foo Fighters. The album is closely ahead of R.E.M.’s (Collapse Into Now) album at No. 11 and six spots behind Glee’s cover album, Vol.5.

Adele’s sophomore album “21” continues to hold the No. 1 spot for many weeks running since it went onsale February 22nd.

On the downside, none of the individual songs made it to the charts- not even the Top 200 singles.

Listen to the Audio sampler of all the songs and read our (in)expert review of the tracks here.

The real test to these studio albums will be in the coming weeks. Can they sustain the spot and for how long? We also have to point out that the record may have scored higher because iTunes opportunely released the “album only” first for a good number of hours before dropping the 13 singles. This left many users confused and a lot have bought the album thinking the individual songs aren’t available as singles. The initial negative reviews of the album speaks to the flurry. Without pulling the same stunt for next week’s album, we’ll see how the finalists’ efforts truly rank in the iTunes music playground.

According to the Idol press release:

“The songs released on iTunes are studio versions recorded by the Idols under the guidance of Jimmy Iovine’s team, including some of the hottest producers in the business, such as Rock Mafia, Rodney Jerkins, Don Was, Jim Jonsin, Ron Fair and “Tricky” Stewart. The 13 individual tracks and compilation album that are now on sale are the first to be released on the 19 Recordings/Interscope label. The compilation album sells for $7.99.”

We forget how big companies get ‘there’ – by becoming very enterprising cough-cunning-cough-shrewd. iTunes is no different.

When they premiered the American Idol Top 13 compilation after midnight, March 10th- they conveniently released the ‘album only’ download first for a good number of hours until users were fuming mad with negative reviews. It meant shelling out $7.99 for the complete set when most fans want only 2 or 3 songs from it.

We were among the anxious ones! iTunes’ trick worked on us. We bought the entire thing because we thought they weren’t selling the singles– only to find out this morning, they offered them for $1.29 each!! Just as well so we can put in our two cents on it.

As our title suggests, we are no expert on music but we love music. We can’t live without it! We go by what we feel, how the song affected us or connected with us. So with that, we can always agree to disagree.

The entire album is ‘strategically’ arranged. You’d think they go by the order of performances on Idol. Nope. They wanted to start and end the album with a bang, squeeze in the other notables in between the bad ones and there you go, you have one entertaining album that you’d want to listen on repeat [except for 2 or 3 we wanted to delete but feel guilty because we paid for them]!

We will review by the album order [the bracket is the order of their performance on Idol]:

What a way to open the album! Very smooth, a lot of soul in there from Mr. Soulman himself! We hope he’s not another Taylor Hicks in the making though. A lot of ummmphhs and ooohhs and if you’re not into that, could be distracting for you, as well as the backup harmonies that keeps echoing, following Casey like his own shadow! The band is also somewhat overpowering that Casey seems in battle with the instruments.  Casey’s rendition excellent. Thumbs down for the production!

Naima is the clear winner on this album. Read, on this album. Her song stood out as the only commercial track out of the 13. She sang one of Rihanna’s most recognizable tune which makes her current and likable. Her voice sounds sooo good! Very recordable, radio friendly! Best produced track in the album. The fact that this song has been covered enough, and to squeeze in a unique reggae/rap interpretation to it that’s hip is a winner.

We don’t like country but we like Shania Twain. Lauren fans please don’t get mad but if you look up Karaoke in the dictionary, they just added the picture of Lauren. Sorry. She is the most overrated contestant this season. She may sound great onstage ‘live’ but this record speaks- she sounds generic. Maybe in a few years, her voice will change and she’ll find her own sound. If she’s going country, she won’t be able to compete with Carrie Underwood or even Kellie Pickler sounding like that.

Maybe I’m amazed indeed! James really showed his soft side in this tune. Just when we were starting to dislike him because he is TOO rockish for our taste, he delivers this unpretentious and honest rendition. We felt he held back a little on this recording, his live performance was way better but we liked this one too.

Never been a fan of this particular song and Ashton didn’t do anything to make us like it. Diana Ross has gazillion hits and she’d pick this one, beats us! She’s pitch-y all over the place. Not sure how this record got past the studio! She just really ‘wasted’ her opportunity. The judges saved her and put her on the wild card, for this? We don’t want to go “there” but it’s clear the judges picked her on the wildcard to add ‘more color’ to the show. Kendra Chantelle should have been in the Top 13!! It didn’t help that all three judges desperately tried to praise her live performance when it was all wrong. Hate to say it but probably the worst track in the album. She’s got the confidence of a diva but she ain’t one– yet!

OMG! Stefano can sing and he can sing Stevie Wonder!! And he can sing like he owned the song! The intro was great until the arrangement got weirder and weirder towards the middle and end! What the heck is this genre?! House music? Still Beautiful though, his fantastic vocals pulled it through.

We feel bad critiquing Jacob. We believe he is the next Luther Vandross. What on earth is he doing singing an R. Kelly song?!! Argh! if they can only place Jacob’s “God Bless the Child” on this album then it would have been perfect. Instead, we get this trite and over-exhausted song of “I Believe I can Fly.” Yawn. Jacob didn’t do anything with this song. Second Worse.

We didn’t think it’s possible but Scotty can make anyone like Country. Didn’t we just write we don’t like country? Scott McCreery has country flowing in his veins and it shows in his every performance. The kid can sing country and he will be embraced by country fans!

Paul’s voice is really unique. It is nice to just LISTEN to him instead of watch his borderline ‘spastic-i’m-having-a-slight-seizure-‘ dance moves performance onstage. At some instance, his voice is too ‘throaty’ so he should watch out and control it. This is soft and sweet. Paul, you should sing David Gray’s “Babylon.” It’s right up your alley- you’d nail the song!!

Thia made us truly smile on this one. Her voice is so sweet and innocent yet powerful, rich and controlled at the same time. Her live performance was off because the transition from intro to the jazzy part was sloppy. The studio recording sounded great! The transition was smooth and flowing. The instrumental beats in the middle of the song (1:35) is addictive! This is the sweetest surprise in the entire album. We loved it. She deserves to go far in the competition.

So Haley, not your fault but we’re just not a fan of yodeling… and since when were you a country singer? Are you as confused as we are as to the kind of artist you want to be? Very lounge-y and karaoke-esque. If you sing more like that, you’d replace Lauren’s photo in the dictionary under the definition of “karaoke.”

NOT. Karen just sang this song. No flavor, too bland for our taste. If we wanted to Listen to a Selena song, we’d listen to Selena. Yawn. Next.

We’re trying to force ourselves to love this version because Pia’s vocals here is just unbelievable! Our issue is the song itself. Again and again we hear it every season- during audition, Hollywood week or the idol stage. Having said that, they didn’t save the best for last for nothing. Pia, if she plays her cards right- can win this whole competition. She is THE COMPLETE PACKAGE ARTIST. Bravo!

“About Us” original song

“Georgia on my Mind”